Six days ago, I used Draft2Digital to distribute The Blue Devil, Book One of my Regency Matchmaker Series, to Barnes & Noble, Apple’s iBooks store, Kobo, and several others.  Here are the results so far:

In the past five days, there have been 907 free copies of The Blue Devil downloaded from all sales venues, excluding Amazon*. 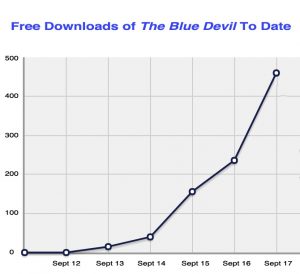 I’m fairly happy with this result. My ultimate goal is for these free copies to entice readers to sign-up to my mailing list.  So far, there’s only been one sign-up, but I’m not worried–yet.

When readers open The Blue Devil, they’re taken right to Chapter One. The front matter (where the first offer is) is skipped. Unless readers hit their back buttons, they miss my “Note from the Author,” where I tell them they can get a free copy of the second book in the series, Miss Grantham’s One True Sin.  Of course, most readers don’t care about a book’s front matter, its copyright information, title page, dedication, Note From the Author, and so on. They plunge right into the story and miss my offer entirely. Knowing this, I offer the free copy of Book Two again, right at the end of Book One. Hopefully, as this batch of new readers begin finishing The Blue Devil, my sign-ups will increase.

In the past 14 years, I’d only attracted 30 subscribers to my mailing list. Yes, you read that right: 14 years. I knew having a mailing list was important, but I just didn’t have the time or the spoons to make it happen. But now I do, and I’ve been doing my research. I know why my mailing list never grew: my offer simply wasn’t strong enough: a newsletter.

Even though I promised an occasional short story to be included with my newsletter, it wasn’t enough. Now, I’m offering an entire free book–the second book in my Regency Matchmaker Series, and the first book in the series is free, too*.  I’ve only had one new subscription so far this week, but I have to tell you I cheered when I saw it.

For the first time, I’m enrolling two of my books into the KDP Select program, which will which means they will be available to readers through Kindle Unlimited.  I’ll be enrolling Books 3 and 4 of the Regency Matchmaker Series into the program tonight, right after I upload the box set I’m working on. Books 1 and 2 are not eligible for KDP Select because the program demands exclusivity for a period of 90 days. The exclusivity thing is what’s kept me from trying KDP Select until now.  It sticks in my craw. But other authors have had good results with KDP Select, so I’ve decided to give it a (limited) try.

Books 1 and 2 and the box set (which contains books 1 and 2) are not eligible for KDP Select, because they’re available elsewhere: I put The Blue Devil on Amazon myself, and I used Draft2Digital to release the ebook to Barnes & Noble, Apple’s iBooks store, Kobo, and several others.  And Book 2 is available through my own website, for free.

Because Books 3 and 4 will be enrolled in KDP Select, I won’t be able to release the box set on any sales venues except Amazon. I’m a little scared of that, knowing that Amazon has had some trouble with rogue authors hijacking their bestseller lists lately, but I’m forging on ahead nonetheless, on the theory that books doing something are better than books doing nothing.  My novels have been languishing for far too long.

As I mentioned above, I’ve been working on releasing an ebook “box set” of the first four books of my Regency Matchmaker Series, and that will go out later today–though it’ll take a 1 – 5 days for it to hit the virtual shelves.

As soon as the box set is out of my hands, I’ll begin working on the release of my first Christmas story for 2017, Once Upon a Christmas.  I’m planning to release three Christmas novellas each year, one in October, one in November, and one in December.  In addition, each year will see the publication of a box set of the previous years’ Christmas stories as an annual anthology.

I’d planned to release Up to Scratch last month, but I’ve pushed that back to January, 2018.

*The Blue Devil is currently free in every venue it’s offered, except for Amazon, which still lists the book for $.99.  I’m going to wait a few days before calling to ask the ‘Zon to price match the book.  I’m a little worried about this, as other authors have reported difficulty in getting Amazon to do this.  If you’d like to help out, you can go to Amazon, search for “Melynda Andrews The Blue Devil,” and click on “tell us about a lower price,” just above my picture.